As per the amended guidelines, Khadi and Village Industries Commission (KVIC), the nodal agency for implementing PMEGP scheme, after due diligence, will directly clear the proposals/applications of the prospective entrepreneurs and will forward it to the Banks for taking credit decisions. As of now, the proposals were scrutinized by the DLTFC, that often led to inordinate delays in sanctioning of the projects.

The pace of employment generation in the country is just going to accelerate. In a significant policy decision, the Ministry of Micro, Small and Medium Enterprises (MSME), headed by Union Minister Shri Nitin Gadkari, has done away with the role of District Level Task Force Committee (DLTFC), headed by the Distt. Collectors, in recommending the proposals under the Prime Minister Employment Generation Program (PMEGP), thereby simplifying the entire procedure.

As per the amended guidelines, Khadi and Village Industries Commission (KVIC), the nodal agency for implementing PMEGP scheme, after due diligence, will directly clear the proposals/applications of the prospective entrepreneurs and will forward it to the Banks for taking credit decisions. As of now, the proposals were scrutinized by the DLTFC, that often led to inordinate delays in sanctioning of the projects.

Chairman, KVIC, Shri Vinai Kumar Saxena said a major bottleneck has been removed with the discontinuation of the DLTFC in approving the projects under PMEGP. He thanked Union Minister Shri Gadkari for taking swift action in the interest of the country.

The government’s move has come at a time when the employment sector has taken a hit due to nationwide lockdown in the wake of the Corona disease. The amendment in the policy would pave the way for swift implementation of projects and create new employment opportunities in rural and semi urban areas under the PMEGP scheme.

It was noticed that the district Collectors/Magistrates heading the DLTFC were often preoccupied with local administrative issues and hence works pertaining to the approval of PMEGP applications was not on their priority at all. Proposals under the scheme remained pending for several months as the District Collectors failed to convene monthly meetings on regular basis. Seeking to overcome this hurdle, the Chairman KVIC Shri Saxena wrote to the Union Minister, Shri Nitin Gadkari in April 20 and requested for his immediate intervention.

“We are grateful that the Hon’ble Minister accepted our request and decided to discontinue the role of DLTFC. This will ensure swift and timely implementation of the projects. The government’s decision will safeguard the interest of lakhs of people in the country seeking employment opportunities under PMEGP.,” Shri Saxena said.

A notification in this regard was issued by the Ministry of MSME on April 28, 2020, which said the “the competent authority has decided that the role of the DLTFC as constituted under Clause 11.9 of the Scheme guidelines, may be discontinued for recommendation of proposals/applications to the financing banks.”

Significantly, the Ministry has also ordered that “all the PMEGP applications presently pending at DLTFCs level may also be withdrawn by the implementing agencies and forwarded to the banks immediately for taking credit decisions.”

As per the new guidelines, the KVIC after receiving the applications will scrutinize and examine the proposals and the corrected applications will be forwarded to the banks for taking credit decisions. Under the PMEGP scheme, loans up to Rs 25 lakhs are given for manufacturing and service industries, in which 15 to 35% subsidy is provided by the KVIC depending upon the area.

The KVIC, in association with the Bankers Association of India, shall also develop a scoring sheet and upload the same on the PMEGP E-portal. The scoring sheet will also enable the applicants to judge their applications at their level and bringing transparency in the process.

It is pertinent to mention that KVIC is playing a pivotal role in creating employment opportunities across India. PMEGP, the flagship employment generation scheme of the Government of India, is spinning a new success story every day.

In the year 2019-20, the KVIC has released over Rs 1951 crore margin money subsidy and established 66,653 projects in the country. The KVIC had set a target of 77,000 projects at the disbursement of Rs 2400 crore in the year 2019-20, but fell marginally short of the target as three crucial months were lapsed due to imposition of the Model Code of Conduct between 10th March to 26th May 2019 for parliamentary election. Another month, i.e. March 2020, remained unproductive due to complete lockdown in the country due to Covid-19.

Khadi activities got a major push during the last year – a year that largely remained affected due to the Covid-19 lockdown - thanks to ... Read More

SMEStreet Foundation have recognized KVIC's Chairman Shri VK Saxena as the SMEStreet GameChanger. This recognition is driven by the proactive efforts in the last few ... Read More 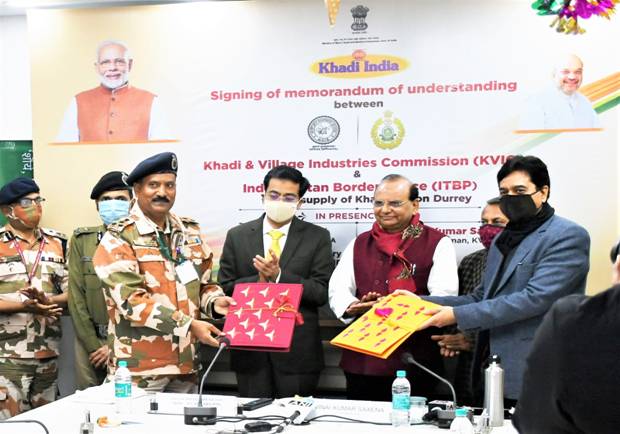 The agreement has been signed for one year which will be renewed thereafter. The total value of 1.72 lakh durries is Rs 8.74 crore. Read More