In a historic move, Finance Minister Nirmala Sitharaman held a press conference at 4 pm to discuss the economic stimulus package of Rs 20 lakh crore that Prime Minister Narendra Modi announced a day earlier during his address to the nation. In a major initiative, the government announces Rs 3 lakh crores Collateral-free Automatic Loans for Businesses, including MSMEs, the finance minister announced. This is getting considered as a major game-changer for MSMEs in India.

Saying that PM Modi laid out a vision after wide and deep consultations with several sections of society. “These discussions were discussed with various ministries and the PM Modi has considered all the possibilities and the factors regarding the package that is being distributed,” she said.

In another major announcement, the finance minister announced that there will be change in the definition of MSME. “You can be a larger-invested company, you will be defined as an MSME,” she said. Another criteria i.e. turnover, along with investment size, will also define an MSME. “What was a micro unit i.e. investments of Rs 25 lakh, the investment is now Rs 1 crore,” she added. 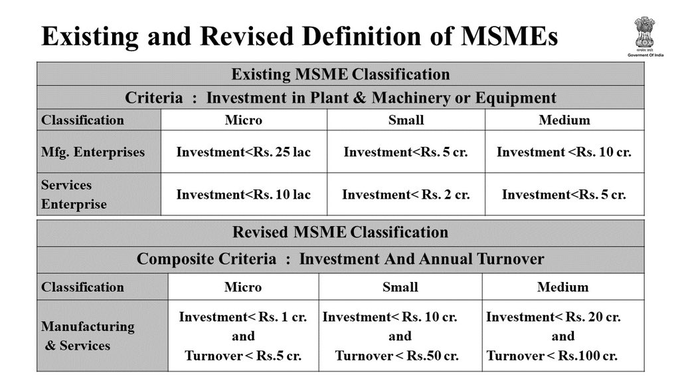 The package, she added, was to spur growth and build a self-reliant India. “This whole initiative is called Aatma Nirbhar Bharat Abhiyaan,” she added.

PM Modi has spoken on five important pillars: economy, infrastructure, tech-driven systems, demography and demand through which India would build Aatma Nirbhar Bharat. “Essentially, we’ll be focusing on the factors of production of land, labour, liquidity and law,” she said, stressing on PM Modi’s speech.

The intention, Nirmala added, was to take local brands and take them to a global level. “Certainly when PM said Aatma Nirbhar Bharat, it doesn’t mean that India will not shut itself from the rest of the world, but to become a global leader in ability to hone local brands,” she said.

While highlighting the achievements of the 2014-2019 government, led my PM Modi, Nirmala said that the DBT ensured that money was directly deposited into the account of the migrant workers. “Many countries are still unable do this, but India is able to,” she said while speaking of other programmes that were focused on taking care of the poor including Ayushman Bharat and Ujala Yojna. “Our government focused on reform-based policies to ensure better living in India,” she added.

Nirmlala added that there was a lot discussed during the Budget 2020, but coronavirus lockdown happened a month later. She added that for the next few days, starting today, to explain how the money will be distributed. “The poor and the aged will be our top pirority,” she added.

Cloudflare partners with 26 VCs and Unveiled $1.25 Billion Fund For Startups

India Among World Leaders in Green Jobs Generation As 8.63 Lakh Employed in 2021