Upon arrival, Shri Naidu was given a presentation by the CMD of Cochin Shipyard Limited, Shri Madhu S Nair and the officials of Indian Navy on the construction process and the overview of the carrier. Later, the Vice President was escorted to the carrier’s flight deck and was briefed about the flight deck design and capabilities. 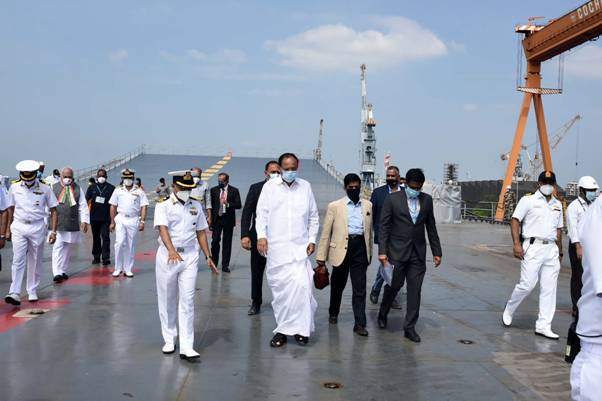 Addressing an event later at Naval Physical and Oceanographic Laboratory (NPOL), a DRDO facility in Kochi, Shri Naidu said he was elated to visit INS Vikrant and called it a ‘technological marvel’. Shri Naidu lauded the cooperation between Indian Navy and Cochin Shipyard Limited in building the aircraft carrier.

The Vice President observed that INS Vikrant will be a major boost to our defence preparedness on the seas. “A strong Navy is indeed a prerequisite for the nation’s growth and the construction of the aircraft carrier is a step in the right direction,” he added.

Shri Arif Mohammad Khan, Governor of Kerala, Shri P. Rajeev, Minister for Industries, Government of Kerala, and other dignitaries were present during the visit.

Discussion on IPR for MSMEs Organised by CICU in Ludhiana