“For every rupee spent by the government on the National Monsoon Mission and High-performance Computing programs of the Ministry of Earth Sciences (MoES), the country would gain economic benefits worth fifty rupees, which is 50 times more benefit on the investment over the next five years period”. This has been affirmed by a report by the National Council of Applied Economic Research (NCAER), which is an independent, not for profit, economic policy research and think tank based in New Delhi. The report was released by the Union Minister of Science and Technology, Health and Family Welfare and Earth Sciences, Dr. Harsh Vardhan today at a function at Prithvi Bhavan, here. Dr. M. Rajeevan, Secretary, MoES; Dr. M. Mohapatra, DG, IMD; Dr. Parvinder Maini, Project Director and Scientist ‘G’ and several senior officials of MoES and IMD were present on the occasion while all institutions under MoES joined via the virtual platform. 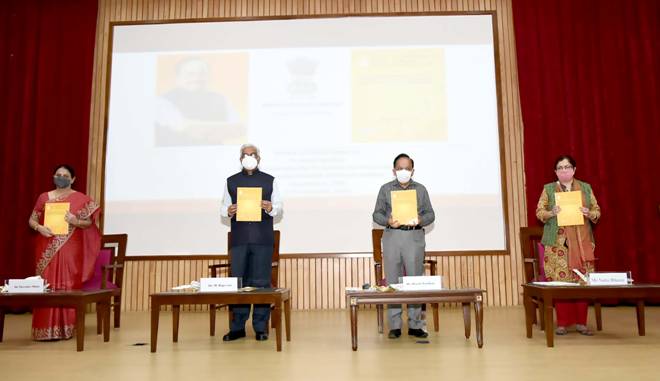 The NCAER report refers to economic benefits as direct monetary gains to crop farmers, livestock rearers, and fishermen in the country.  According to the report, India’s investment of nearly 1,000 Crores in the National Monsoon Mission and High-Performance Computing (HPC) facilities would provide benefits worth rupees 50 thousand Crores to nearly 1.07 Crore below poverty line (BPL) agricultural households and 53 Lakh BPL fisher-folk households in the country.

NCAER study was based on a face-to-face survey of 6,098 respondents including 3,965 crop farmers, 757 marine fishermen, and 1,376 livestock owners. Along with this, responses from 2 lakh farmers were also collected through interactive voice response system ( IVRS) to validate the findings of the face-to-face survey. IVRS is a technology that allows computers to interact with humans through the use of voice and input via keyboard. Data for both pre- and post-monsoon mission periods was incorporated which enabled analysis of the production and yield of major crops before and after the implementation of the National Monsoon Mission (which happened in 2015). A total of 173 districts (of the total 732 districts in India) across 16 states (of the total 29) were considered for the study to appropriately represent agro-climatic zones, rain-fed areas, coverage of major crops, and incidence of extreme weather events in the country.

The National Monsoon Mission was launched by MoES in 2012 with an aim to develop a state-of-the-art, dynamic monsoon prediction system for short, medium, and long-range forecasts. The augmentation of the National Monsoon Mission with High-performance Computing facilities has helped the country in achieving a paradigm shift in weather and climate modeling for operational weather forecasts. The successful development of a Global Ensemble Forecast System for short and medium-range prediction at 12 kilometers and its operationalization in 2018 was made possible due to National Monsoon Mission and augmentation of the High-performance computing facilities from 1PetaFlop to 10PetaFlop.

Agro-climatic zone refers to a geographical area with similar soil type, rainfall, temperature, and water availability. India is divided into 15 major agro-climatic zones, of which 10 zones that experience all monsoon events ranging from drought to floods have been covered by the NCAER study. By prioritising areas which were rain-fed, and important for livestock-based interventions, a total of 173 districts were chosen for the survey. Over 70 percent of all major crops grown in India were covered under the purview of the study. These include both kharif and rabi.

India Meteorological Department (IMD) in collaboration with the Indian Council of Agricultural Research (ICAR) provides district-level agro-meteorological advisories to farmers through 130 agro-met field units to nearly 40 million farmers under ‘Gramin Krishi Mausam Sewa (GKMS)’ twice a week for all the districts in the country. These advisories are communicated to farmers via mobile SMS, apps such as Meghdhoot, on IMD website, Kisan Portal, and conventional media such as television, radio, and newspapers. Farmers use these advisories for critical farm operations like management of sowing, changing crop variety, spraying pesticides for disease control and managing irrigation etc.

Out of the 3,965 crop farmers interviewed across 121 districts of 11 states of India, a large majority affirmed to be positively impacted by weather advisories. They confirmed having made changes in critical agricultural practices such as crop variety or breed, fertilizer or pesticide application schedule, irrigation or harvest time, arranging for storage, etc. to reduce losses and increase income. From a total of 1,376 livestock owners interviewed across 92 districts of 10 states of India, a majority reported that weather advisories bear a positive impact on their livelihood. They confirmed to be making decisions about livestock management practices such as vaccinations, modification of sheds and shelters, and fodder practices based on weather parameters issued by IMD. Livestock farmers included both marginal and large, and those who owned cows, cattle, goats, and poultry. The report provides an estimated income gain of nearly 13 thousand crore rupees per year for agricultural and livestock farmers and an incremental economic benefit of nearly 48 thousand crore rupees over the next five years.

With a total of 53 Lakh BPL line fisher-folk households, the report estimated income gains of 663 Crore rupees per year and an incremental benefit of more than two thousand Crore rupees for the next five years to fishermen alone.  Out of the 757 marine fishermen across 34 districts in 7 states of India who were surveyed, a majority reported using ocean state forecasts before venturing into sea and for avoiding empty trips. According to them, their decisions based on ocean state forecasts and advisories have substantially improved their livelihood by reducing their operational cost.

The NCAER report also assessed economic benefits to the agriculture-related womenfolk of the country. Women play an important role in various agriculture activities, for example, in the fisheries sector, they support finance, supplies and sourcing, staff management, and marketing. They handle the customer base and enhance it, keep track of prices, nets, and other fishing assets. Realizing the importance of weather predictions to women, NCAER estimated benefits of nearly 13 thousand Crore rupees to women alone, which is 26 percent of the total benefit provided by the national monsoon mission and high-performance computing facilities. The survey also revealed that every woman from a fishing household included in the survey wanted to know the ocean state forecast provided by the Indian National Centre for Ocean Information Services (INCOIS) through messaging services on an everyday basis.