Tap water supply increases four-fold from 7% to 31% In 117 Aspirational districts with 84 lakh households getting tap connections in just 22 months. UNDP lauds India’s Aspirational Districts programme ‘as a very successful model of local area development that should serve as a best practice for several countries’

An independent appraisal reportreleased by United Nations Development Programme (UNDP) has lauded the Aspirational Districts programme (ADP) ‘as a very successful model of local area development that should serve as a best practice for several countries where regional disparities in development status persist for many reasons.’ With concerted efforts made under ADP, these 117 districts in remote locations with low human development indicators and basic facilities, have experienced faster development. Jal Jeevan Mission has played a key role to make it possible. On 15th August, 2019, when Jal Jeevan Mission was announced, only 24.58 lakh (7%) households in Aspirational Districts had tap water supply. In a short span of 22 months, tap water connections have been provided to additional 84 lakh households in thesedistricts and thus now 31.37% household have assured tap water supply. This 24% increase in coverage in aspirational districts is more than 22.72% increase in tap water supply across the country during these 22 months. 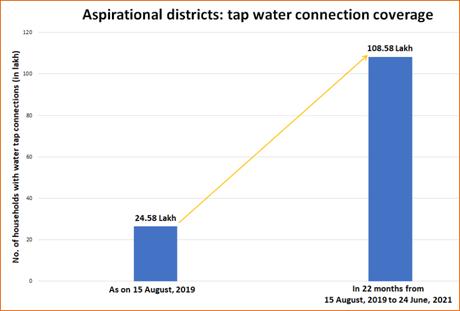 The Aspirational Districts Programme was launched by the Prime Minister Shri Narendra Modi in January, 2018 as a part of government’s effort to raise the living standards of citizens livingin 117 districts which were lagging behind in various human development index parameters. Jal Jeevan Mission is a key programme reducing deep inequalities in these districts. Following the principle of Prime Minister’s vision of ‘SabkaSaath, Sabka Vikas, Sabka Vishwas’, the motto of the Mission is that ‘no one is left out’ and every household in a village should be provided with tap water connection.

At the start of Jal Jeevan Mission in 2019, out of a total of 19.20 Crore rural households in the country, only 3.23 Crore (17%) had tap water supply. During the last 22 months, despite Covid-19 pandemic and lockdown disruptions, Jal Jeevan Mission, has been implemented with speed and 4.36 Crore households have been provided with piped connections. With the increase in coverage by about 23%, presently 7.59 Crore (39.58%) rural households across the country have tap water supply. Goa, Telangana, Andaman & Nicobar Islands and Puducherry have achieved 100% household connection in rural areas and has become ‘Har Ghar Jal’. Translating the Prime Minister Shri Narendra Modi’s vision of providing clean tap water to every household, at present, every household in 63 districts and about 94 thousand villages has tap water supply.

Union Minister, Jal Shakti, Shri Gajendra Singh Shekhawat in his letters to the Chief Ministers of States have been constantly reiterating the emphasis given by the Prime Minister, Shri Narendra Modi to provide tap water on priority in next few months to all households in Aspirational Districts, SC/ST majority villages and quality-affected areas. 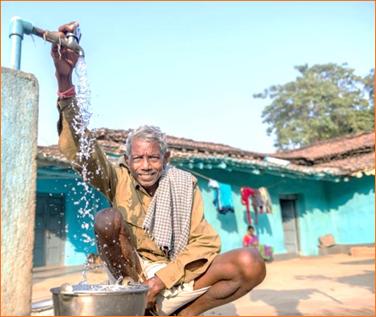 For other States, Union Minister, Jal Shakti, Shri Gajendra Singh Shekhawat in his letters to the Chief Ministers has urged them to ensure that in few months provision of safe tap water is made in all remaining schools, ashramshalas and anganwadi centres of their States for better health, improved sanitation and hygiene for children.

Jal Jeevan Mission announced by the Prime Minister on 15thAugust 2019 from Red Fort is under implementation in partnership with States/ UTs to provide tap water connection to every rural household of the country by 2024. Total budget for Jal Jeevan Mission in 2021-22 is Rs 50,011 Crore. With State’s own resources and Rs 26,940 Crore as 15thFinance Commission tied grant for water and sanitation to RLBs/ PRIs, this year, more than Rs. 1 lakh Crore are being invested in rural drinking water supply sector. This is creating new employment opportunities in villages and boosting the rural economy.

SMEStreet Edit Desk is a small group of excited and motivated journalists and editors who are committed to building MSME ecosystem through valuable information and knowledge spread.
NEWER POSTmyBillBook to Simplify Billing & Accounting for SMEs
OLDER POSTPharmEasy to Acquire Over 66% Stakes in Thyrocare