In line with the graded, pre-emptive and pro-active approach of the Government of India, Dr. Harsh Vardhan, Union Minister for Health and Family Welfare chaired a high-level review meeting with the Health Ministers of 11 States/UTs to review measures taken by the States/UTs for prevention, containment and management of the recent surge in COVID-19 cases. The meeting lasted for more than three hours. These States/ UTs including Maharashtra, Chhattisgarh, Rajasthan, Gujarat, Madhya Pradesh, Kerala, West Bengal, Delhi, Karnataka, Tamil Nadu and Uttar Pradesh are reporting an unprecedented surge in new COVID cases. 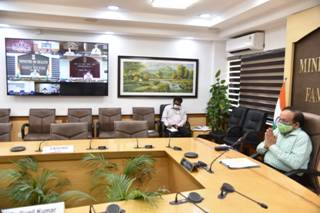 The Union Health Minister presented a snapshot of the unprecedented rise in new cases at the outset. He noted that India reported its highest single day spike on 12th April 2021 which was also the highest number of daily new cases reported in the world. India contributed 22.8% of the total cases reported worldwide on 12th April 2021. He said, “India is currently reporting the sharpest growth rate of 7.6% in new COVID cases, which is 1.3 times higher than case growth rate of 5.5% reported in June 2020. This is leading to an alarming rise in daily number of Active Cases, which currently stand at 16,79,000. There is also a sharp growth of 10.2% in the number of deaths. The widening gap between Daily New Cases and Daily New Recoveries reflects that the infection is spreading at a much faster rate than recoveries with consistently growing active cases.” All the 11 States/UTshave already crossed their highest reported daily case threshold with some districts like Mumbai, Nagpur, Pune, Nashik, Thane, Lucknow, Raipur, Ahmedabad and Aurangabad also following the same pattern.

Dr Harsh Vardhan also detailed the corresponding rise in Health Infrastructure to cope with the crisis: “From just 1 lab at the start of the Pandemic, we now have 2463 labs that have a combined daily testing capacity of 15 lakhs. 14,95,397 tests conducted in the last 24 hours have increased the Total Tests conducted to 26,88,06,123. The three-tier health infrastructure to treat COVID according to severity now includes 2084 Dedicated COVID Hospitals (of which 89 are under the Centre and the rest 1995 with States), 4043 Dedicated COVID Health Centres and 12,673 COVID Care Centres. They have 18,52,265 beds in total including the 4,68,974 beds in the Dedicated COVID Hospitals.” Reminding the Health Ministers that 34,228 ventilators were granted to the States by the Centre last year, Dr. Harsh Vardhan assured a fresh supply of the lifesaving machines: 1121 ventilators are to be given to Maharashtra, 1700 to Uttar Pradesh, 1500 to Jharkhand, 1600 to Gujarat, 152 to Madhya Pradesh and 230 to Chhattisgarh.

Detailing the number of beneficiaries vaccinated in each targeted segment of the population, Dr. Harsh Vardhan also addressed the perceived issue of vaccine shortage. The Total Consumption of vaccines so far (wastage included) has been approximately 12 crore 57 lakh 18 thousand doses against the 14 crore 15 lakh doses provided by the Centre to the States. About 1 crore 58 lakh doses are still available with the States while another 1 crore and 16 lakh 84 thousand are in pipeline, to be delivered by next week. “Stocks of every small state are replenished after 7 days. For big states, the time period is 4 days,” he added. Emphasizing that there is no shortage of vaccine, he strongly pushed for the further ramping up of vaccination exercise.

The State Health Ministers shared a brief snapshot of the actions taken for containment, surveillance and treatment of the COVID positive cases along with best practices of their States. The issues of augmenting supply of oxygen cylinders; stepping up supply of Remdesivir in hospitals; adding to the ventilator stock; and enhanced supply of vaccine doses were raised by almost all the States and UTs. Many of them raised the issue of dovetailing the Medical Oxygen supply lines and the capping of prices of essential drugs like Remdesivir which has been sold in the black market at exorbitant prices. Double mutant strain in Maharashtra was a key point of concern. The Delhi government requested for additional beds in central government hospitals as was done in 2020 to help tide over the emergent health crisis. The notification of Home Ministry granting permission to the States to utilize up to 50% of their annual allocation of State Disaster Response Fund and that of the Union Health Ministry allowing for utilization of unspent pending balance under National Health Mission as on 1st April 2021 for COVID management purposes was re-iterated.

The Union Health Secretary informed the States on the steps taken for providing medical grade oxygen and augmenting Remdesivir stocks in the country which were a fruition of several meetings being taken in this regard by Health Secretary, Home Secretary, SecretaryDPIIT, Secretary Pharmaceuticals etc. They were also informed of the issuance of the calendar of Medical Oxygen Supply to the States from different oxygen manufacturers in the country. The steps taken for unhindered movement of oxygen cylinders from their manufacturing units across States were also detailed.

Taking note of the active surge in cases witnessed since last February in which most states have now crossed their highest tally, Dr. Harsh Vardhan exhorted the States to plan in advance and increase COVID hospitals, oxygenated beds and other relevant infrastructure to deal with any further surge in cases. He requested the States to give special focus on the prominent 5-6 cities in their administration, map medical colleges to either these cities or adjoining 2-3 districts. The States were asked to seek out positive cases with the onset of early symptoms so that prompt and effective treatment checks the deterioration of health in the diseased. Large containment zones for achieving community quarantine were also suggested as a strategy. The Union Minister reminded the States to send the clinical and epidemiological pictures to assess genomic mutants of the pathogen to the coordinating INSACOG nodal officer and attempt to correlate the public health scenario with the clinical picture. Director, NCDC informed on the steps taken for genome sequencing to understand the issues related to the mutant strains.

SMEStreet Edit Desk is a small group of excited and motivated journalists and editors who are committed to building MSME ecosystem through valuable information and knowledge spread.
NEWER POSTLG and GM to Build $2.3 Billion EV Battery Manufacturing in US
OLDER POSTEn-Cashing Cashews, Africa Must add Value to its Nuts

16.5 Lakh Doses of Remdesivir Allocated in 6 Days Between May 3 and May 9

Union Minister of Chemicals & Fertilisers reviews the availability of drugs for covid treatment and other essential drugs. Increased capacity of Remedesvir will augment the ... Read More

By way of an additional incentive, said Das, such banks will be eligible to park their surplus liquidity up to the size of Covid loan ... Read More

This will be in addition to the facilities currently available at SAIL's five integrated steel plants at Bhilai (Chattisgarh), Bokaro (Jharkhand), Rourkela (Odisha), Durgapur and ... Read More

Here is a fresh SMEStreet Podcast between Kiran Kalakuntla of ekincare and Faiz Askari of SMEStreet. This exclusive chat explains how COVID era has completely ... Read More