A vibrant domestic steel industry is essential for a developing economy as it is a critical input across major sectors such as construction, infrastructure, automotive, capital goods, defence, railways, etc. Steel has also proven to be a driver for prompt environmentally sustainable economic development due to its recyclable nature and faster associated completion times. The steel sector is also pivotal for the nation in terms of employment generation and economic growth. It has a multiplier effect on the economy stemming from both direct and associated effects on the supply chain and consumption industry. India is the second largest producer of crude steel in the world.

Production and Consumption:The production performance of Steel sector during the first eight months of the current fiscal has been quite encouraging with cumulative production of crude steel at 76.44 MT and finished steel at 72.07 MT during April-November, 2021 being higher than that in the similar period during the previous three years.  This improved performance was achieved despite the adverse effect of second wave of COVID-19 and concomitant localised lockdowns.  The following graphs depict cumulative production and consumption over four years: 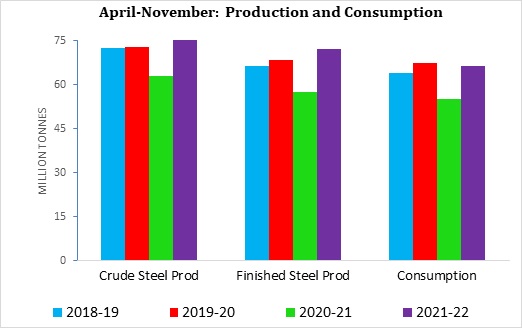 (I) Domestic Manufacturing: Ministry of Steel had notified the Policy for Providing Preference to Domestically Manufactured Iron and Steel Products (DMI and SP Policy) on 8th May, 2017 to provide preference to domestically produced iron and steel material in Government procurement.

The Policy was subsequently revised on 29th May, 2019 andon 31st December, 2020. The policy envisages growth and development of domestic steel industry.

(II)Production Linked Incentive (PLI) Scheme: PLI scheme for domestic production of speciality steel with an outlay of Rs.6322 crore has been approved and detailed guidelines have been notified on 20th October, 2021.This will result in capacity addition of 25 MT, additional investments of about Rs.40000 crore and employment generation of 5.25 lakh.

(I) MoU with Russia : A MoU has been signed between Ministry of Steel and the Russian Federation on 14th October, 2021 for cooperation in the field of coking coal, used for steel making.

(II) CAPEX :The cumulative CAPEX by steel CPSEs for April-November of the current fiscal at Rs.5781.1 crore is 75.7% higher than CAPEX during CPLY. The CAPEX for April-November, 2021 was 43.5% of the BE target.

(V)MSME Payments :The status of pending payments to MSMEs by CPSEs of the Steel Ministry is being monitored on weekly basis to ensure that the same is credited timely and well within the 45 days’ time limit for such payments with 97.4% of the payment during April-November of the current fiscal being made within 30 days. During April-November 2021, Steel CPSEs have made a payment of Rs.3358.61 crore to MSMEs which is 64.5% higher than payment of Rs.2041.61 crore made during CPLY.

(VI) Steel Usage:To promote steel usages in various sectors, Ministry of Steel has been jointly organising workshops/ Webinars to spread the awareness for benefits of enhanced steel usage in various sectors. Ministry of Steel has also formed a Committee of experts from INSDAG, IITs, Ministry of Road Transport and Highways (MoRTH) and industry experts for development of designs for long span (30m, 35m, and 40m) steel based Bridges. The design for 30 m is being vetted by the experts for finalisation.

The Committee formed jointly with Ministry of Petroleum and Natural Gas to prepare a roadmap for promoting domestically produced steel in Oil and Gas Sector has submitted the final report in August, 2021. A Joint Working Group (JWG), having members from Ministry of Housing and Urban Affairs (HUA), Ministry of Skill Development, Ministry of Steel, BIS, CPWD, Technical Institutions (IITs) and from Industry, has also been setup for fostering steel usage in Housing and Construction sector to develop standardized design and layouts of housing configurations with Steel structure.

(VII)COVID 19 Response: The steel sector immensely contributed in meeting the Liquid Medical Oxygen (LMO) requirement of the nation during the second wave of COVID-19. The supply of LMO from the steel plants which was only 538 tonnes as on 1st April 2021 was quickly scaled up to touch the peak of 4749 tonne on 13th May 2021. The steel plants have also set up jumbo Covid care facilities using gaseous oxygen around their plants with a capacity of around 5,500 beds.

Air Pollution in North and West India up During Pandemic

This is How Aluminium Industry is Contributing Towards Aatmanirbhar Bharat