A decline in the manufacturing sector brought down India’s factory output in June, official data showed. The factory output, as per the new Index of Industrial Production (IIP) with revised base year of 2011-12, declined by (-)0.1 per cent during June from a rise of 2.80 per cent reported for May, 2017.

The factory output had expanded by eight per cent in the corresponding month of the previous year.

As per the IIP data released by the Central Statistics Office (CSO), last month’s contraction was mainly on account of a (-)0.4 per cent deceleration in manufacturing output, which has the maximum weight in the overall index.

Besides manufacturing, the output of other two major sub-indices — mining and electricity — slowed during the month under review.

The mining output inched-up by 0.4 per cent and that for electricity generation edged higher by 2.1 per cent.

Among the six use-based classification groups, the output of primary goods contracted by (-) 0.2 per cent, (-) 0.6 per cent in intermediate goods, consumer durables declined by (-) 2.1 per cent and capital goods’ was lower by (-) 6.8 per cent.

In contrast, the output of consumer non-durables edge-higher by 4.9 per cent and 0.6 percent in infrastructure or construction goods.

Commenting on the IIP data for June, A. Didar Singh, Secretary General, Ficci said, “The fall in manufacturing which is more broadbased this time is a cause for concern and underlines the need for more reforms especially at the state level. This is important to improve the investment climate further.”

“Besides reforms at the state level, we need to ensure faster development of our infrastructure which is a major enabler of growth and instrumental in reducing the cost of doing business in the country to make our manufacturing competitive.”

Another key industry body Assocham said that latest estimates of IIP point to negative sign towards the growth cycle of industrial activity. 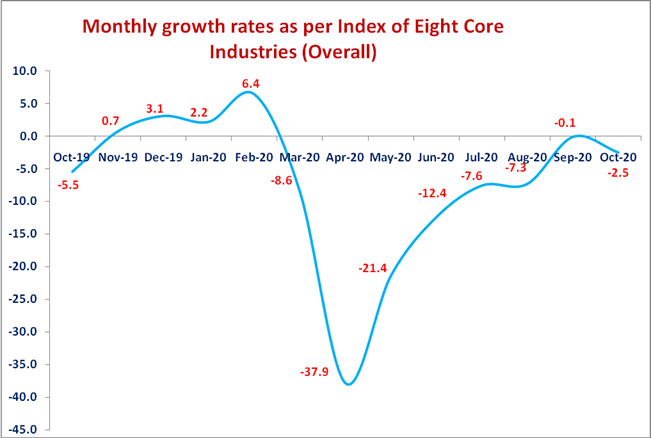 Suresh Prabhu and US’ Counterpart Discussed Trade Collaborations Between India & US

It was agreed that Indian and US officials would meet at a senior level at an early date to discuss various issues of interest to ... Read More