India’s Leather exports are one of the major contributor of total export output of the country. The segment has it’s own issues and challneges. Scientists of the Central Leather Research Institute (CLRI), a unit of the Council for Scientific and Industrial Research (CSIR) announced a breakthrough in scientific processes for the leather sector.

“This development, a paradigm shift, is aimed at multiple benefits relating to in-process abatement of effluent problem, curtailing process steps, huge water conservation, time economy and cost saving.” said Dr Harsh Vardhan, Union Minister for Science and Technology. He also announced that CLRI has succeeded in fostering an “enzymatic intervention” to complete in just 30 minutes the enabled fibre opening process which till now has taken up to 72 hours.

It is a new, biodegradable dispersing agent developed by CLRI that enables the chrome tanning of leather with just half the normal usage. This ensures the saving of water by 15 million litres per day in the Indian leather sector alone –and an estimated 200 million litres per day if this revolutionary technology is applied globally.

Dr Harsh Vardhan, Union Minister of Science and Technology and Earth Sciences and Vice-President, CSIR while visiting the laboratory closely identified this lab and its achievements with the current agenda of the Government in terms of ‘Make in India’ as well as providing essentials to the common man and to provide high science based technologies to the medium, small and micro enterprises.

The Hon’ble Minister was extremely impressed and congratulated the scientists for the success story of an enduring partnership among the trinity of academy, research and industry in leather sector, spun around CLRI over a period of sixty six years. While interacting with the industry he appreciated their efforts and the partnership they have with CSIR-CLRI. This unique partnership is a testimony of development of leather sector in the country.

The sector is increasingly becoming green technology oriented due to the efforts of CSIR-CLRI.

He has also noted that the Institute offers B.Tech., M.Tech. and Ph.D. in leather and footwear sciences through Anna University that could set an example for other sectors to emulate to make the Prime Minister’s National Skill Development Programme for inclusive employment generation.

“DST has an extraordinary impact on the S&T ecosystem in the country. DST’s reach and depth in every area is huge, making it truly the ... Read More 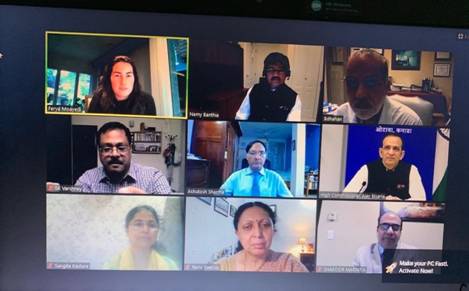 Prof. Ashutosh Sharma: “Methods should be explored to take the cooperation between the two countries to a different level. Best practices in the areas of ... Read More

Mentorship is Critical to Separate Startup Success and Failure

In this article written by Monica Mehta is Executive Vice President, National Entrepreneurship Network (NEN) at Wadhwani Foundation, it is highlighted that how versatile and ... Read More

‘Digital Expertise To Pave SMEs In New Normal Amid COVID-19’

Financial ‘Sanjeevani’ for MSMEs from U GRO Capital

In an exclusive conversation with SMEStreet, Anuj Pandey COO of U GRO Capital explained trends and his observations in the MSME lending space. Read More